Disclaimer: This is a forward looking post where I’m not using scientific research. Instead it’s  hypothetical and can be found unrealistic. However, I find it worth to share to imagine a possible future.

For sure you have seen the Matrix, but probably long ago. Watching it again in 2016 made me think about the future of sustainable energy, artificial intelligence and Virtual reality.

What if the Matrix was not conceived to harvest human energy (which has no sense as an energy cycle) but to reduce the energy consumption of humanity and maximize the number of humans?

Imagen from Xaver trokis in freeimages.com

I’m convinced that we will live in abundant energy in the near future, and possibly with the harnessing of fusion, this will be even more. The problem will not be energy but other more limited resources such as food and water, if more than 100 billion humans are to live in the planet.

Will it be necessary to create a matrix, where we live in virtual reality, but consume the minimum water and food per human? Would that be necessarily a choice for each individual to live in the virtual reality / simulation, instead of real live with restricted access to resources?

If the goal of the human species is to multiply and increase species resilience by becoming interplanetary, virtual reality life paired with lowest resource consumption can allow to live in the mind and multiply anywhere.

In fact, if Artificial Intelligence has the goal of maximizing the number of humans, that is the path we might take, don’t you think?

Regarding interplanetary travel, it might be the solution for several generations to travel while living in virtual reality, until another livable planet 1000 years apart is reached.

However, this theory could be completely wrong if there is an evolution towards cyborg humans where minds become artificial and undying…

The following picture was taken in Casablanca from the Kenzi Tower one month ago. It isn’t the best example, though, for example, in Cairo, it strikes more to the eye.

What do you see?…

Actually, there are approximately 200 TV antennas on the roof-tops. Let’s zoom in a bit:

In this portion, corresponding to one building alone, you have around 25 units.

With the advent of cable television, wireless video streaming and other technology, these antennas could soon become stranded assets in many countries. Imagine how many could be left useless and need recycling. While thinking about asset utilization and the sharing economy, I couldn’t help but think:

What can they be used for instead?… END_OF_DOCUMENT_TOKEN_TO_BE_REPLACED

Recently we got published an article on short circuit current limiting on Elevier’s Electric Power Systems Research, were I’m a co-author;

The results of the research and pilot project for this technology are promising. The short circuit current limiting with a superconducting system (SFCL-Superconducting Fault Current Limiter) is an example of FACTS (Flexible AC Transmission System) for the Smart Grid. It allows a real-time response, that is an automatic reaction, reducing short circuit currents, thus avoiding damage to equipment. This enables a more meshed operation while the energy losses are kept low.

The paper presents the operational benefits and performance of an installed system in a distribution network. These benefits are translated into economic terms, with the goal of setting a target price for economic feasibility of such systems. While the difference between the economic target of 100 k€ and the cost of the real project is tenfold, it remains a trigger for market adoption. Moreover, it is likely that economies of scale and technology improvements drive the implementation cost down in the coming years.

The consequence of widespread use of SFCL would be more reliable and resilient distribution networks. We will see more of this coming, in the near future.

The complete article is available for some days on the link: http://authors.elsevier.com/a/1SbPa1M7~0UanK

On one hand, the rise of renewable energy, even before the 100% goal, will bring a surplus of power. This means there will be excess power that is not required in the system. It already is happening and it will be even more so. This power can be stored, but of course, using it directly is more efficient and thus, preferable.

On the other hand, the penetration of robotics and software will change the jobs available for humans, as is in discussion in Davos these days. This means there will also be a surplus of productivity.

We recently got published the following article on Elsevier’s Solar Energy:

You might want to have a look at the results… END_OF_DOCUMENT_TOKEN_TO_BE_REPLACED

If you are interested in Smart City technologies and experiences, I strongly recommend the following report from Nesta:

Rethinking Smart Cities From The Ground Up

The proposal is similar to how I suggest to build the Smart Grid: Do it bottom-up, empowering the consumer/citizen. In this case, the report justifies that the highest return is on collaborative technologies that allow the citizens to participate and shape the future of their cities. 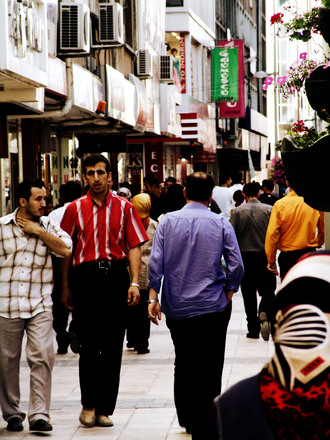 Autonomous Electric Vehicles (AEV) not only will change the way we drive, (actually the way we won’t drive)

There is a more interesting consequence related to Asset Utilization and Efficiency you should consider.

The key to unlocking so much efficiency potential from such a vehicle is the time when the owner is not been driven by the car. When the car is working for it’s owner, that’s where the “magic” happens…

Image by D. Warrington on freeimages

During these otherwise idle times, the AEV can be in use (increasing the utilization of the asset) and enhancing the efficiency for a) it’s ownership, b) the electric and energy system and c) the logistic systems.